Heavy rains in Mumbai, trapped on the track Mahalaxmi Express, affected by flights, flooding in many areas 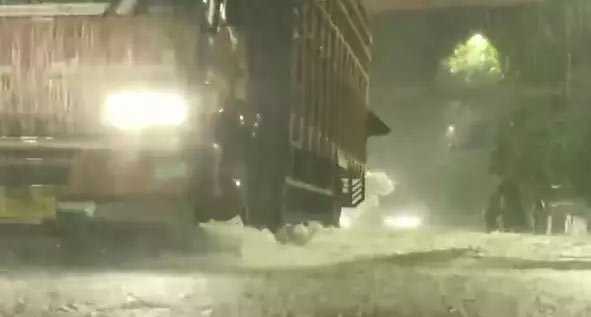 Life is disrupted by heavy rains in Mumbai and adjoining areas of Maharashtra. According to the Meteorological Department, in the last 24 hours, Mumbai has received 150 to 180 mm rainfall. Even today there are heavy rains. During this time people have been advised not to go out and not to go to the beach. 24 flights have been affected so far due to bad weather. Mahalaxmi Express is trapped on a track full of water between Badlapur and Vangani stations. The NDRF team has left for the removal of 2 thousand passengers stranded in it.

Three boats were also sent for the passengers stranded in the train, Meanwhile, the rescue defenders and the city police reached the spot and distributed essential items like biscuits, water to the passengers stranded in the train. Brijesh Singh of the Directorate General of Information and Public Relations (DGIPR) told that three boats have been dispatched to remove the fugitive Mahalaxmi Express passengers who are suspected to be involved between Badlapur and Vangani stations. (Heavy rains in Mumbai)


According to the Meteorological Department, the residents of Mumbaikars are yet to get relief from the rain. The forecast released by the department on Friday has also shown the possibility of storms in the capital and its surrounding areas. According to the department, in the next 4 hours, there is a possibility of strong winds running at 50 to 60 kmph in Thane, Raigad, and Mumbai. Apart from this, due to strong monsoon streams, heavy rains are expected in the North Konkan area in the next 48 hours.

Appeal for the passengers to stay in the train, Central Railway's CPRO has appealed to the passengers of the Mahalaxmi Express trapped in the water. In his appeal, the railways have said, "We request passengers of Mahalaxmi Express that they do not get off the train. The train is safe. Railway staff, RPF and civilian police are searching for you on the train. Please wait for the advice of NDRF and other risk management agencies.

7 flights canceled- Heavy rains in Mumbai
Due to bad weather and heavy rains, air travel in the state has also been affected. Chattrapati Shivaji International Airport's Public Relations Officer said that for the past two hours due to heavy rains in the state, almost all flights are on average for half an hour. PR of Mumbai International Airport Limited (MIAL) said that 24 flights have been affected so far. 7 of these have been canceled while 8 flights have landed again after some time after landing canceled and the route of 9 has been diverted.


Weather Department issued Orange alert
Earlier, the Regional Meteorological Center of Mumbai, Mumbai, Maharashtra, released Orange Alert in Thane and Pune on Friday. Prior to this, a red alert has been issued for Palghar on July 26 and 28. Explain that different alerts are issued from different ranges ranging from red to orange to different situations of monsoon. Among them are the Orange Alert officers to be ready to deal with the serious situation.
Tags:
Breaking News India Latest