pushp news August 05, 2019
Article 370 removed The Central Government removed Article 370 on Monday. Now Jammu and Kashmir and Ladakh will be separate Union Territories. For this, Home Minister Amit Shah presented the resolution for the removal of Article 370 in the Rajya Sabha. After proposing a proposal in Shah's Parliament, President Ramnath Kovind issued notification under the Constitution Order (for Jammu and Kashmir) 2019 to remove Article 370. 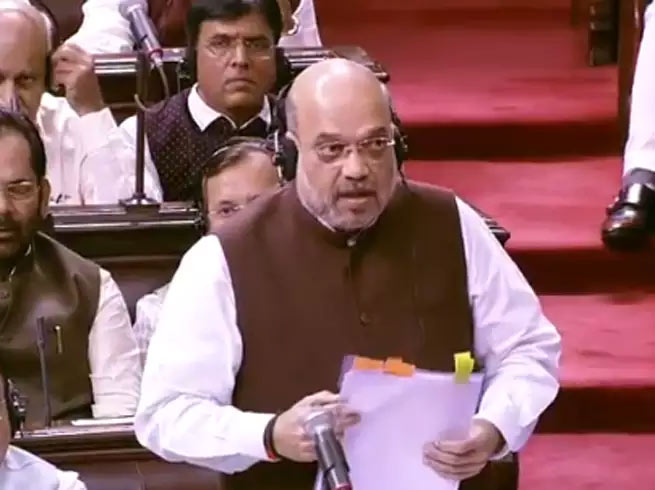 Earlier, when the Rajya Sabha proceedings began, then Chairman M Venkaiah Naidu asked Shah to present the Jammu and Kashmir Reservation Amendment Bill. On this, Leader of Opposition Ghulam Nabi Azad said that there is a curfew in Kashmir. Three former chief ministers have been detained. Things are similar in the state, as in times of war. The bill will then be passed. We are not against the bill, but we should first discuss the situation of Kashmir. We have also given notice about this. There should be a discussion about it for one hour. On the statement of Azad, Shah said that I am ready to answer every question on the issue of Jammu and Kashmir and this bill is also in connection with Kashmir. 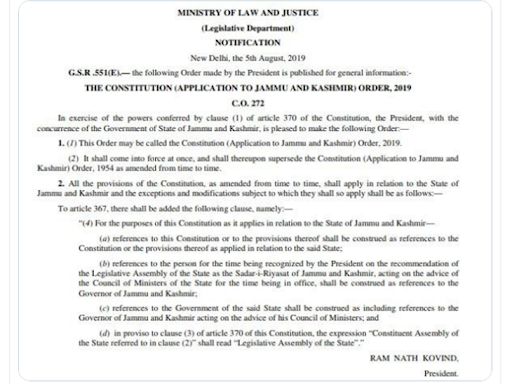 PDP asked the MPs to go out (Article 370 removed)

During the discussion, PDP MP Mir Fayaz and Nazir Ahmed Lave were violating the Constitution, which led to Naidu demanding both of them to leave the house.

On reaching Parliament House, journalists asked Shah about the big decision on Kashmir, but they did not respond, and smiled and went inside. Congress gave postponement notice in both the houses and before the proceeding, there was a meeting in Ghulam Nabi Azad Chamber. Apart from this, leaders of Mehbooba Mufti's party PDP, AIMIM MP Asaduddin Owaisi, CPI and other parties will raise the issue of Kashmir in Parliament.

The Home Minister will present 10% Reservation Bill of Economic Backward Classes in Jammu and Kashmir in the Rajya Sabha. This bill has passed from the Lok Sabha on June 28. The Modi government has made provision for a special reservation to the citizens of the border areas in Jammu and Kashmir in the Jammu and Kashmir Reservation Amendment Bill 2019. So that they can get an opportunity to equalize in economic, social and educationally. Shah had told in the Lok Sabha that people living on the LoC and the international border read to live in Shelter Home. Children have to stay here for many days. Schools are closed. Their studies are affected. Therefore, they are being given reservation. This will benefit three and a half lakh people.

Under the bill introduced by the Home Ministry, the Jammu and Kashmir Reservation Act, 2004 has been amended. People living near the international border due to passing the bill in the Rajya Sabha will also get the benefit of the reservation. Amendment in the reservation rule says that any person who has gone from backward areas, LOC (LoC) and international border (IB) for safety reasons will also get the benefit of reservation.