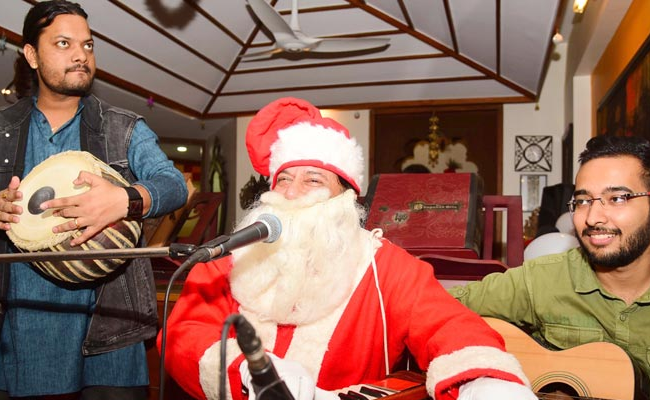 Christmas 2019: The whole world is colored in the color of Merry Christmas at this time. There is a lot of enthusiasm among people about Christmas everywhere. Our Bollywood is also not untouched by this. Bollywood stars are also seen as having a Christmas party. Bhajan Samrat and Bigg Boss contestant Anup Jalota also organized a Christmas party at his house. Many people reached it. During this, Anup Jalota celebrated the party in his style.

Anup Jalota took the form of Santa Claus during a party at home. After this, he cut the cake with the people. During the party, Anup Jalota also narrated songs to the people at home. Its videos are becoming viral on social media.


Whether 'Aisi Lagi Lagan' or 'Jingle Bell'.... Both display Devotion & Faith. Deck up and Sing along the current mood of Festivities. Merry Christmas Eve to all! #christmaseve #merrychristmas #christmasspiritandme #tuesdayvibes
A post shared by Anup jalota (@jalotaanup) on Dec 24, 2019 at 2:30am PST


Anup Jalota Christmas party:  Anup Jalota cut the cake during the Christmas party and played the harmonium in Santa's dress and went to 'Jingle Bell ... Jingle Bell' in a desi style. During this time people present at home were seen supporting them.

Now after getting this video on social media, people are very much liked.
Tags:
Entertainment