Priyanka Gandhi said in Congress's Desh Bachao Rally, it is possible to snatch jobs and increase inflation if Modi is there. 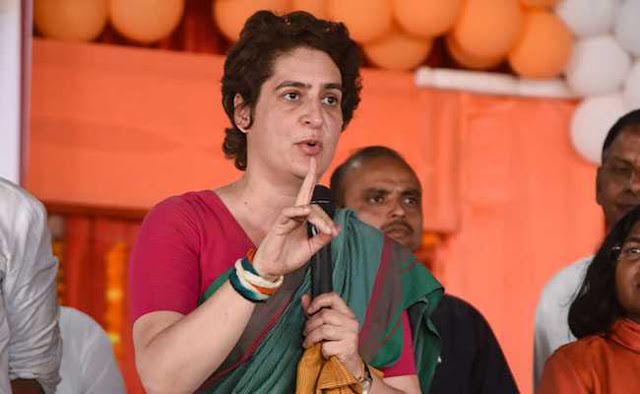 Priyanka Gandhi said: At the Congress's Desh Bachao rally, Priyanka Gandhi made a scathing attack on the Yogi government of UP from Ramlila Maidan in Delhi. Taking up the case of the rape victim being burnt alive in Unnao, Priyanka said that criminals burnt the daughter going to court in the hope of justice. She ran for one kilometer and finally fell.

Priyanka Gandhi said further, "I remembered my father seeing that daughter's father crying." The Congress general secretary said, 'I brought home my father's sieve body at the age of 19. My father's blood is mixed in the soil of this earth. The blood of the daughter of that farmer is also watering the soil of this country. It is our responsibility to stop the atrocities happening here.

Priyanka Gandhi said further: 'It is possible to end jobs if BJP is there'

Taking a dig at the BJP's slogan of 'Modi is to be possible', Priyanka Gandhi said, 'If BJP is there then 100 rupees onion is possible. If there is BJP, unemployment is possible in 45 years. It is possible to finish 4 crore jobs. Sales of the railway and airport are possible.

Also, read this: Rahul refuses to apologize on 'rape in India' statement, says- Modi has described Delhi as rape capital, I have a clip

Chidambaram said, why did the minister not say good days
Before them, P. Chidambaram said that the country's economy is going down. In the last 6 months, the Modi government has ruined the economy. Yesterday, the Finance Minister said that everything is right and the country is at the top in the world, but he did not say the same thing that good days are coming.

Priyanka Gandhi said that this country has emerged from a unique freedom struggle. Emerged from a movement that defeated the world's largest empire through non-violence and love. This country wants to hold each other's hands. The dream of a strong future in a young man's eyes, the sweat of the worker in the crops and factories of the country is the country.
Tags:
News