IND vs NZ: India defeated New Zealand in the third over in a super over, also won the series

pushp news January 29, 2020
IND vs NZ: New Zealand team captain Kane Williamson (95) could not win his team against India in the third T20 on Wednesday. The Indian team also captured the series by winning this match in the Super Over. India scored 179 runs for 5 wickets in 20 overs, New Zealand team could also score 179 runs for 6 wickets in 20 overs. 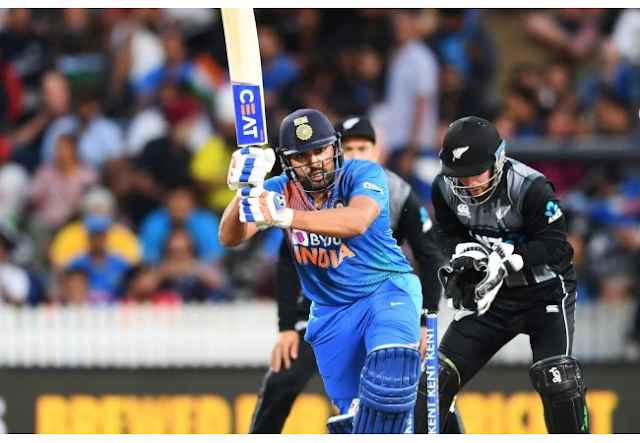 In the super over, New Zealand scored 17 runs with the help of 1 six and 2 fours and the Indian team scored 20 runs. Rohit Sharma hit two consecutive sixes in the super over and gave Team India the victory. With this win, India took an unassailable 3–0 lead in the 5 match series.

Both New Zealand openers returned by 52 runs
Chasing a target of 180 runs, the New Zealand team had a good start and scored 47 runs in 5.4 overs. Guptill was hunted by Shardul Thakur and caught by Substitute Sanju Samson. Guptill hit 2 fours and 3 sixes off 21 balls. After this, Colin Munro (14) was hunted by Ravindra Jadeja and Lokesh Rahul was stumped out. Munro hit 2 fours off 16 balls.


Williamson took over, missed a century
Captain Kane Williamson, who landed at number three, played fine innings and took the team to the threshold of victory. He added 36 runs for the third wicket with Mitchell Santner (9), then a 49-run partnership for the fourth wicket with Colin de Grandholm (5). Williamson contributed more runs in this. Santhal was bowled by Chahal while Grandhom was caught by Shivam Dubey off Shardul.

Shami thrilled in the last over
In the final over, the hosts needed 9 runs to win, but the team could only score 8 runs. Ross Taylor hit a six on the first ball and took a single on the second. Mohammad Shami caught Kane Williamson (95) behind the wicket on the third ball. Williamson hit 8 fours and 6 sixes in 48 balls. Taylor (17) was then bowled on the final ball. Taylor hit 1 four and 1 six off 10 balls.

Rohit-Rahul beat the bowlers
As soon as Rahul and Rohit Sharma arrived, playing in an aggressive manner, the New Zealand bowlers took a beating around the field. Both Tim Southee and Hamish Bennett proved costly. Saudis could not get any wickets while Bennett took 3 wickets but conceded 54 runs. India scored 69 runs in the first six overs.

A big night for these two at Seddon Park. Shami defending in the final regulation over before Sharma hit the winning Super Over runs. #NZvIND pic.twitter.com/0WWuH2LwLp
— BLACKCAPS (@BLACKCAPS) January 29, 2020

Sent Dubey to number three, failed
Rahul fell victim to Colin de Grandhom at the other end. Shivam Dubey (3) was sent to number three but the experiment failed. He was dismissed after playing seven balls and also broke the flow of the Indian innings. Under this pressure, Rohit also lost his wicket to Bennett. India lost three wickets within seven runs in three overs.

Virat Kohli and Iyer's partnership
Captain Virat Kohli (38 off 27 balls) and Shreyas Iyer (17 runs) shared a 46-run partnership for the fourth wicket. Virat hit 2 fours and 1 six in his innings. Iyer hit 1 six off 16 balls. His wicket fell in the 17th over and Kohli also returned to the pavilion after two overs. Manish Pandey scored 14 and Ravindra Jadeja scored 10 to take India across 170.
Tags:
Sport