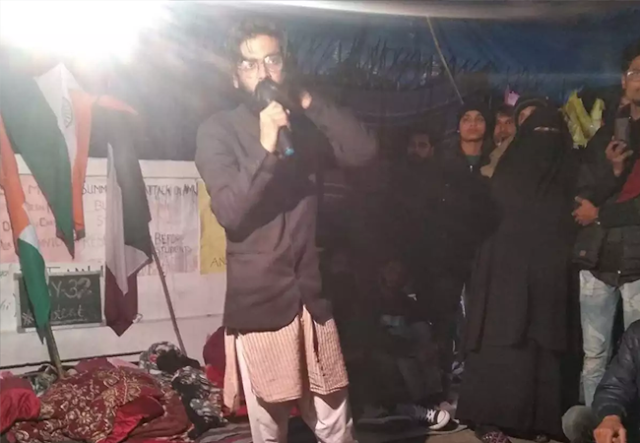 Sharjeel Imam arrested: Delhi Police's Crime Branch on Tuesday arrested Sharjeel Imam, a student of Jawaharlal Nehru University (JNU) from Jehanabad, Bihar. Sharjeel, who is pursuing his Ph.D. from JNU's Center for History Studies, has been charged with sedition in six states, including Delhi, Assam, for making inflammatory speeches in Aligarh during demonstrations against the Citizenship Amendment Act. Earlier in the morning, Sharjeel's brother was detained by the police.

According to the report, Jehanabad police will present Sharjeel before the magistrate today, after which he will be brought to Delhi on transit remand. The  Sharjeel Imam came to light when a controversial video of him surfaced on social media. In this viral video, Sharjeel says, "If we have to help the people of Assam, then they have to be cut off from India."

Crime Branch Deputy Commissioner of Police Rajesh Dev said, "We have arrested Sharjeel Imam from Jehanabad. Police had deployed five teams to locate the Imam, a resident of Bihar. Raids were conducted in Mumbai, Patna and Delhi to capture him. On the arrest of Sharjeel Imam, Bihar Chief Minister Nitish Kumar said that no one should do anything which is not in the interest of the nation.

The police were constantly pushing for the arrest of Sharjeel Imam. The central agency team reached Mallik Tola in Kako at around 4 am on Tuesday. Sharjeel Imam's house was searched again. During this time, the police took Sharjeel's younger brother Muzammil Imam and his friend Mo. Took Imran with her.

The Delhi Police crime branch is top officer claimed on Monday that the absconding Sharjeel Imam was last seen at a meeting in Phulwari Sharif, Bihar, on January 25, 2020, at around 7-8 pm.

Kejriwal targeted, said, people are facing problems, BJP does not want to open the way

BJP reversed the statement made by Shashi Tharoor on Jinnah, GVL said - ask this question to Rahul Jinnah