pushp news January 06, 2020
JNU violence: Delhi Police is now in action after masked attacks on students on Sunday night at Delhi's Jawaharlal Nehru University (JNU attack). According to the police, he has received several complaints about the assault. The police are also claiming to have identified some of the masked men. Home Minister Amit Shah has spoken to Delhi Lieutenant Governor Anil Baijal and Delhi Police Commissioner and sought an immediate report on the violence. Meanwhile, students admitted to AIIMS have been discharged after the attack was injured. Please tell that more than 25 were injured in this attack. 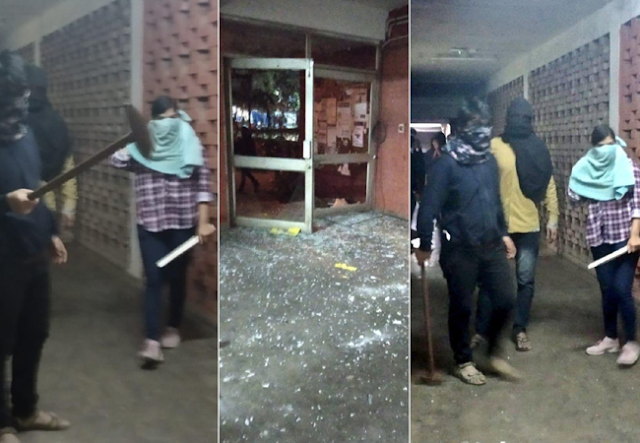 JNU violence: Let us tell you that the issue of the increase in fees has been hot in JNU for the last several days. On Sunday night, some masked miscreants beat up students and teachers badly and vandalized the campus. In this case, JNU's leftist student organization and RSS-backed ABVP are accusing each other. Both groups are describing themselves as victims. However, no such masked person was found involved in the violence of any one faction.

JNU attack: Police were engaged in establishing peace on the campus till morning, after which investigation is being done. At the same time, the entire investigation of the JNU violence has been handed over to Joint CP Western Range Shalini Singh, so that the fairness of the investigation remains. The police say that on Monday morning the police have registered an FIR in the riot sections, although the accused has not been arrested yet. The police also say that some people have been identified, but no information can be given about them yet.

Why the controversy erupted

JNU attack: The JNU administration started the registration process amid protests after the fee hike and January 5 was its last date. However, the students who were protesting on Saturday disconnected the Internet and server wires required for registration, which brought the registration process to a standstill. When some students protested this work, they were allegedly beaten up and then the protest against the fee hike turned into ABVP vs Left. The protest became violent from Sunday evening and the crowd became violent after the masked miscreants arrived. During this, the student and the teacher were all beaten up.


The brutal attack on JNU students & teachers by masked thugs, that has left many seriously injured, is shocking.

The fascists in control of our nation, are afraid of the voices of our brave students. Today’s violence in JNU is a reflection of that fear.

JNU violence: According to police sources, screenshots of many WhatsApp chats have been going viral since the incident, but those screenshots are not true. His veracity has now been questioned because whoever is making it viral is being done on behalf of leaders of student organizations and blaming their opponents. At present, the police are investigating the case.

If the Samajwadi Party government is formed, they will give pension to those opposing the CAA
Threatening to destroy Nankana Sahib gurdwara, Harbhajan said to Imran - very sad to see this
BJP will issue a toll-free number, support from a missed call
Tags:
News