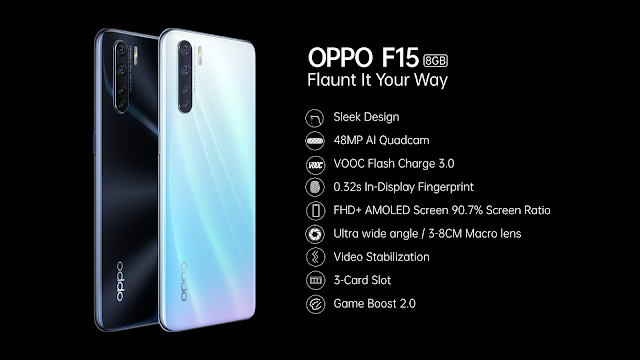 Don’t let low battery stop you! Be the champion and #FlauntItYourWay with the sleek #OPPOF15 and its VOOC Flash Charge 3.0. It gives you 2-hour talk with just 5-minutes of charging! Can it get any faster than this? pic.twitter.com/EbyR9i6rJZ
— OPPO India (@oppomobileindia) January 16, 2020

The smartphone has a 6.4-inch full HD + AMOLED screen, its screen-to-body ratio is 90.7 percent. The resolution of the screen is 2340 x 1080 pixels. The smartphone has Gorilla Glass 5 protection. The quad-camera setup has been given in the rear of Oppo F15. That is, there are 4 cameras on the back of the phone. The main camera in the rear of the phone(Oppo smartphone) is 48 megapixels. Apart from this, 2 cameras of 8 megapixels and 2 megapixels have been given in the back of the smartphone. The phone has a 16-megapixel front camera for selfie. The camera features modes such as professional mode, panorama, portrait, night scene, time-lapse photography, slow motion.