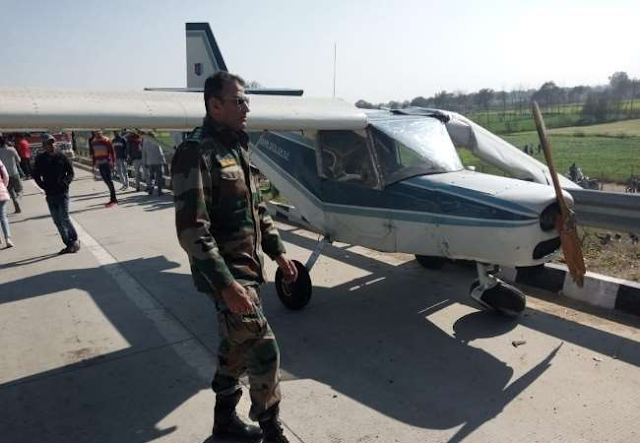 A case of an emergency landing of a chartered plane on the Eastern Peripheral Expressway in Ghaziabad, Uttar Pradesh, adjacent to Delhi, has been reported. On the information, the Indian Airforce rescued the pilot, there has been no loss of life, but the expressway has been jammed for a long time.

According to the information received, due to a sudden malfunction in the chartered plane in Sadarpur village of Ghaziabad on Thursday afternoon, the emergency landing had to be carried out on the Eastern Peripheral. During the landing, one left wing of the aircraft has been damaged, while the Air Force personnel who arrived at the information have saved the pilot completely safe.

Thankfully no one was seriously injured during this period. How many passengers were there in the chartered plane other than the pilot? Information about this too could not be found.

Ghaziabad: An aircraft made an emergency landing at Eastern Peripheral Expressway near Sadarpur village today, after it faced a technical problem. pic.twitter.com/ALRTCquHGA
— ANI UP (@ANINewsUP) January 23, 2020

At the same time, due to the accident on the expressway, there was a long jam, which is causing great problems for the drivers. There are also people from many villages around the expressway, who have reached the police to remove them.

According to the Ghaziabad police who reached the spot, the traffic here will soon be smooth and the jamming problem will be over.

The aircraft was by NCC cadet
It is being told that the aircraft that made the emergency landing belonged to the National Cadet Corps. The pilot was giving training during the accident. Two people including the pilot were aboard the aircraft.
Tags:
News