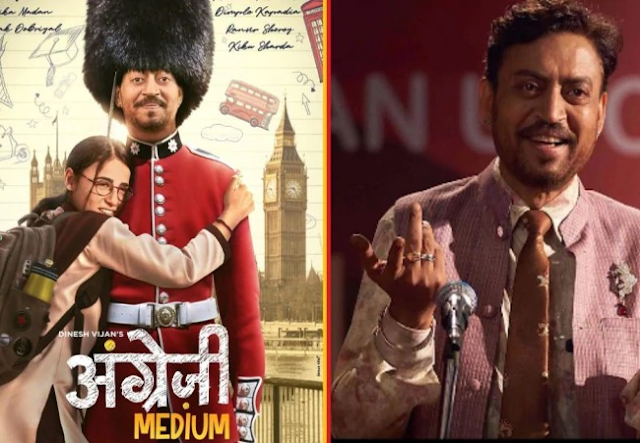 'Angrezi Medium' Trailer Review: The wait for Irrfan Khan's fans to see him on the screen is over. The trailer of his next film 'Angrezi Medium' has been released and believe him his film is going to tickle you inside.

The trailer of the film begins with the school scene where the children are being felicitated and the turn comes to the felicitations of Irrfan's daughter and they also reach the stage. More than words, he tries to express his feelings through hand gestures. Somehow he starts in English, but in the end, he says that he knows this much English, he cannot speak more than this. Hearing these things of Irrfan, everyone laughs and Radhika Madan, seen in the role of her daughter, also laughs.

Also, read this Vicky Kaushal speaks about the affair with Katrina Kaif - love is the best feeling

In the film, Irrfan and Radhika Madan are very much like the father-daughter and the chemistry of both is equally great. The story of the film is that Irrfan, who runs a small shop, his daughter Radhika is very good at studies. The daughter's dream is to study in London, for whose collecting money is a big task for them. For the money, he reaches to donate blood, after which, it is known that nothing will happen to them.

Kareena Kapoor is seen in the middle of the trailer, which is seen in the role of the London Police, there is something that happens with Irrfan and Deepak Dobriyal that he is stuck in the police circle.


There are many funny actors in the film

Irrfan has to do a lot and endure to fulfill his daughter's dream. There comes a time when it seems that it is very difficult to collect so much money. In the trailer, in addition to Irrfan, Radhika Madan, Deepak, Kiku Sharda, Dimple Kapadia, Pankaj Tripathi, Ranveer Shorey are seen glimpses of all the desired artists.

'Angrezi Medium' is the sequel to 'Hindi Medium'

Let me tell you that this is the sequel to the 2017 Hindi hit film Hindi Medium, in which Irrfan Khan and Saba Qamar were seen. The film was well-liked by the audience. 'Angrezi Medium' is releasing on 20 March 2020. Irrfan has been battling cancer for a long time and is still not well. The film has been produced by Dinesh Vijan, while it has been directed by Homi Adajania.

David Dhawan will make 'Judwaa 3' with this star except for Salman Khan and Varun Dhawan!