Budget 2020: What is the Blue Economy, about which Nirmala Sitharaman has made a big announcement 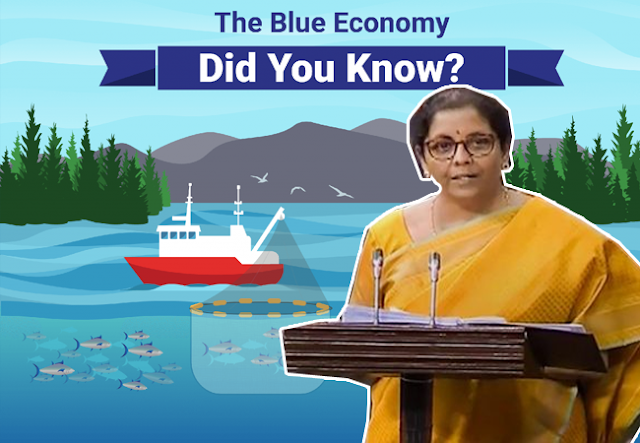 Budget 2020: Finance Minister Nirmala Sitharaman has announced 'Sagar Mitra Yojana' for fishermen. She said that this scheme is being brought to promote Blue Economy. Sitharaman said that 500 fish production organizations will be formed under the Sagar Mitra scheme. Under this, employment will be given to the youth of the coastal region by linking them with fisheries. She said that the target is to increase fish production to 200 lakh tonnes by the year 2022.

What is a blue economy?


The blue economy is associated with the sustainable use of ocean-related resources. That means taking advantage of it without damaging the ocean ecosystem. It can also be called the economy of the sea. The seas cover one-third of the entire earth. 97 percent of the Earth's water is in the sea. Three to five percent of global GDP is determined by the seas. India is also surrounded on three sides by the sea. 90% of India's total trade is by sea. That's why the blue economy is very important for India. It is next called the 'Sunrise Sector'.

- Under the Blue Economy, the base of the economy is the maritime sector. In this, business models are prepared keeping in mind the protection of the environment and employment is given.


Also, read this Finance Minister's big announcement for the health sector, Ayushman Bharat Hospital will be in every district

- Through 'Blue Growth', there is an attempt to solve the problem of lack of resources and disposal of waste.

- Under the Blue Economy, the aim is to keep the sea clean and to produce on a large scale from the sea.

- Fisheries, marine energy, transport from ports, tourism are part of the blue economy and they also generate employment.

NITI Aayog has also advocated the 'Blue Economy' for the country's economy.


Also, read this Who is the Kashmiri whose poem Nirmala Sitharaman recited while giving the budget
Tags:
News