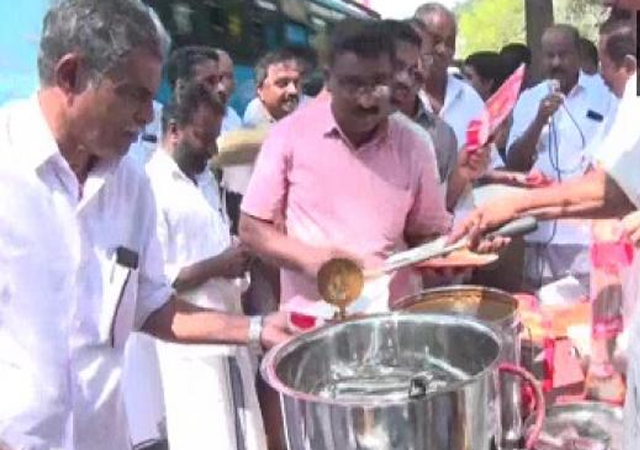 Politics has once again become hot in Kerala. Congress workers on Tuesday distributed beef curry and roti in front of Mukkam police station in Kozhikode amid reports of beef trainees being removed from the food menu of police trainees in Kerala. A campaign to distribute beef curry and roti were launched outside the Mukkam police station by Kerala Pradesh Congress Committee General Secretary Advocate K Praveen Kumar to protest the removal of beef from the menu.

Praveen Kumar told the reporters, This shows Kerala Chief Minister P Vijayan's inclination towards the Union. He met Prime Minister Modi soon after he was an oath in as Chief Minister and after that he made Loknath Behera as Director General of Police, making sense with the BJP. Loknath Behera gave a clean chit to PM Modi and Amit Shah in the Gujarat riots case. Now Bohra is implementing the Union agenda. Congress will expose Vijayan's double stance in front of the entire state.

The Kerala Police Department said in a statement that as per the decision of the Mess Committee, they were instructed to prepare healthy food along with the food available in their respective areas. Its purpose is to give the trainees the necessary energy through food. This committee consists of representatives of trainees and police officers. "

The controversy over beef in Kerala is not new. Even before this, the leaders of Kerala Youth Congress have been publicly in a dispute over cow cutting. In 2017, a video was shared in which it was alleged that some activists and leaders of the Kerala Youth Congress were seen publicly biting the cow. BJP had alleged that Youth Congress workers had slaughtered the cow in front of the people. This case had increased so much that not only was the case registered, but Rahul Gandhi also had to be clarified.

Rahul Gandhi had tweeted on the matter and said that what happened in Kerala is an incident that no one can support. Apart from this, state Chief Minister Pinarayi Vijayan wrote a letter to PM Narendra Modi and demanded to intervene in the matter.