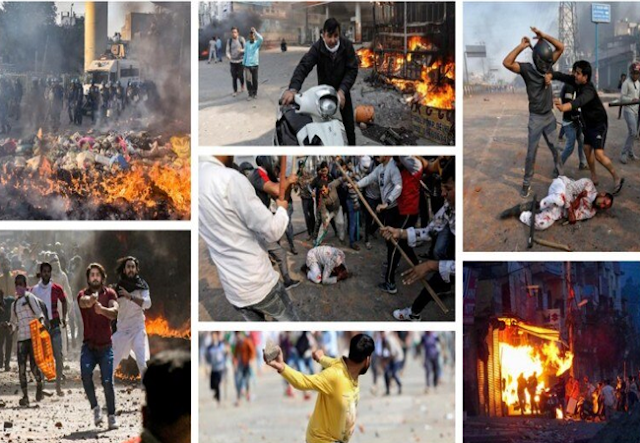 Delhi Violence: The death toll in the violence in Delhi over the Citizenship Amendment Act(CAA) is increasing. So far 34 people have died in the violence that took place on Sunday, Monday and Tuesday in North East Delhi, including police personnel Ratanlal and IB officer Sharma. On Wednesday, there were reports of sporadic arson and sabotage in some areas of North East Delhi including Jaffer, Babarpur, Maujpur, Seelampur, Satpura, but the heavy deployment of police force showed a decrease in violence cases. There have not been sawed any fresh cases of violence on Thursday, but the number of deaths from the G TM hospital has been steadily increasing. So let's know that all the updates related to Delhi violence.

The death toll in the North East Delhi violence has risen to 34. Death has been confirmed at Jag Pravesh Chandra Hospital in Shahdara.

OP Mishra, Joint Commissioner of Delhi Police announced during the flag march in Chand Bagh area, 'Ration shops, medical shops, and other shops can be opened. No need to fear The police is here for your protection. Do not gather in groups, especially youth.

Congress spokesperson Randeep Surjewala, High Court Judge  On the transfer of S Muralidhar, he said that the BJP is an example of 'hit and run' by the government.

Congress has questioned the transfer of Justice Muralidhar of Delhi High Court. Congress has called it shameful that we are surprised by the overnight transfers. Randeep Surjewala said that the BJP leaders have been transferred to save them, the whole nation is shocked. After all, how many judges will the government transfer?.

#WATCH Delhi Police Joint Commissioner OP Mishra during a flag march in Chand Bagh area announces, "Grocery, medical and other shops can be opened. There is nothing to fear, police are here for your security. Please don't assemble in groups, especially the youth". #DelhiViolence pic.twitter.com/nYhseSjf00
— ANI (@ANI) February 27, 2020

How the Delhi violence started:

A large number of people opposing the Citizenship Amendment Act blocked the road on Sunday, leading to clashes between supporters and opponents of the CAA. Similar protests also started in many other areas of Delhi. In Maujpur, BJP leader Kapil Mishra asked the police to remove the anti-CAA protesters within three days. After 3 days you won't be able to stop us. Soon after, members of both groups pelted stones at each other, leaving police with tear gas shells.

Know what benefit India got between Trump and Modi in today's meeting
Tags:
News