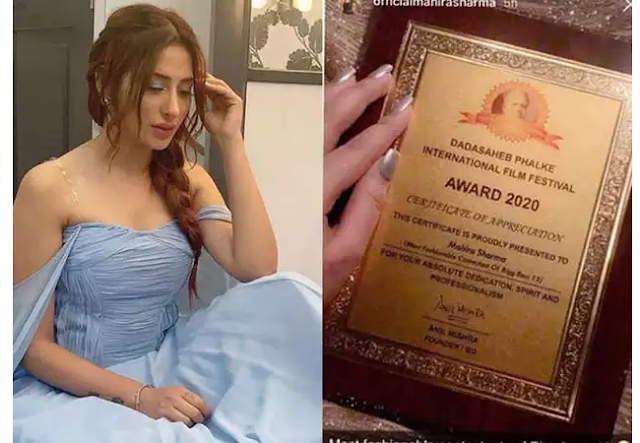 
Let me tell you that Mahira Sharma was present in this event and shared the photo of the certificate(Dadasaheb Phalke Award) on her Instagram Story at around 11:30 pm on 20 February 2020 and told that she has received this award for 'Most Fashionable Contestant of Bigg Boss 13'. This is where Mahira's troubles started, as her post was reshared from the fans page and many media houses also gave prominence to this news.

DPIFF officials have issued a statement saying that the certificate that Mahira has shared has not been given a certificate from her team or anyone involved in this event and hence the award is fake.

DPIFF also states that Mahira Sharma has done this wrong thing for publicity and for her benefit, in which her name was used and it tarnishes the image and reputation of her brand. There is also a mention in the statement that many media houses and blogs have published this news without source verification and without knowing the truth of the news.


Dadasaheb Phalke Award: The team has issued a letter asking Mahira to stop this wrongdoing through his PR team and in writing has also been asked to publicly apologize within 48 hours. Along with this, it has also been said that if this is not done then legal action will be taken against them in this case.

Let us know that recently, Mahira Sharma has also been trolled for copying Alia Bhatt's dressing style. Mahira was very much discussed in 'Bigg Boss 13' and there were a lot of headlines about her closeness with Paras Chhabra.


Priyanka Chopra become the most followed Bollywood celebrity on Instagram