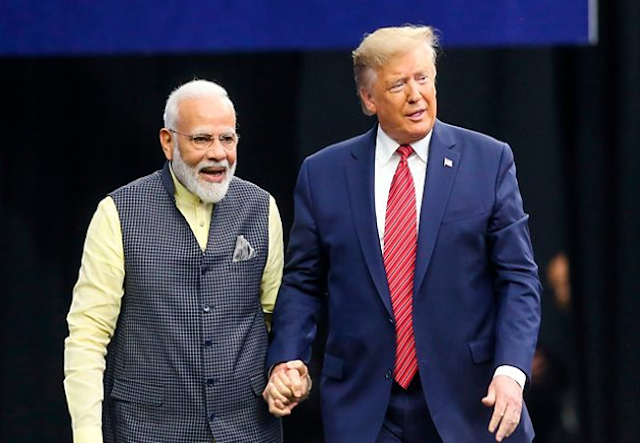 On a two-day visit to India, US President Donald Trump has reached Motera Stadium with Prime Minister Narendra Modi and wife Melania Trump. PM Modi welcomed the trump with his speech. PM Modi said that today a new history is being created in Motera Stadium, today we are also seeing history repeating itself.

After leaving Ahmedabad airport, President Trump and PM Modi traveled to the Sabarmati Ashram, traveling 22 kilometers while doing a roadshow. Trump and Melania spent about 10 minutes there. During this time, he tried to cut yarn by spinning the spinning wheel. As Trump attempted to spin the spinning wheel for two minutes, the Trump couple wrote their views in the visitor's book. PM Modi showed the importance of Gandhiji by showing him a statue of three monkeys. He then left for the 'Namaste Trump' program in Motera.

All are respected in India
Trump said that there is discrimination from place to place in the world but in India, everyone is respected. Whether they are Hindus, Muslims, Buddhists or Christians, all live together. No other example like India is found elsewhere.

America is a trusted partner of India

PM Modi said that Trump displayed his love for India. Where there is friendship, trust is unwavering. America is a trusted partner in India. Trump has brought pride to India by coming here. Trust between India and the United States has strengthened. The scope of our friendship has increased in every field.
Tags:
Live News