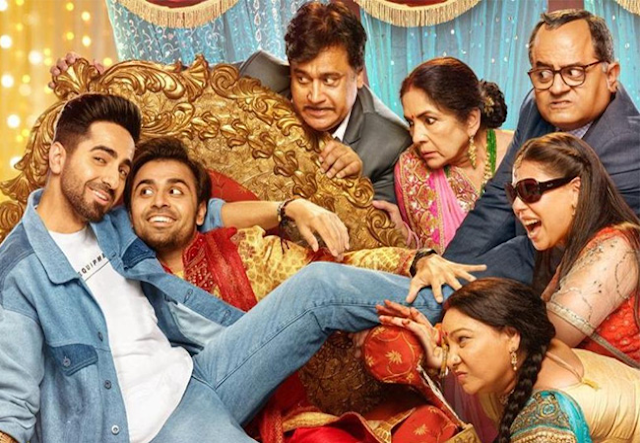 Shubh Mangal Zyada Saavdhan Review: Every day we have to fight a fight in life, but the fight that happens with the family is the biggest and the most dangerous. Produced by Anand L. Rai and directed by Hitesh Kevalya, this dialogue of 'Shubh Mangal Zyada Saavdhan' narrates the helplessness and struggle of the gay community. Indeed, even though the law may have excluded homosexuality from crime, the homosexual community has to suffer hatred, reproach, and rejections from their own families in the form of homophobia. The film proves to be successful in proving the point that just making laws will not make the matter, it is also important to have social counseling that homosexuality is not a disease but nature and you cannot hate it.

The story 'Shubh Mangal Zyada Saavdhan' is that of Karthik (Ayushmann Khurrana) and Aman (Jitendra Kumar). Both are in love and live together in Delhi. The troubles begin when the two go to Allahabad to attend the wedding of Gogal (Manvi Gagaru), the daughter of Karthik's uncle (Manushi Chaddha), and the secret of their homosexual relationship is revealed there. The whole family, including Aman's father Shankar Tripathi (Gajraj Rao) and mother Sunayana Tripathi (Neena Gupta), are shocked to learn this. Now the challenge before Aman and Karthik is to convince everyone to accept their relationship.

The most notable in terms of acting is Amun's uncle Manuishi Chaddha and aunt Sunita Rajwar. Both of them seem to be the most comfortable among their characters. In many scenes, they also appeared to be overshadowing the Nina-Gajraj pair. Nina-Gajraj has done a good job, but to a large extent, he was seen repeating his 'congratulations ho' attitude. Jitendra Kumar sits perfectly in the character of Aman due to his simplicity and innocence, but his dialogue delivery and performance lacked confidence in many places.

In 'Shubh Mangal Zyada Saavdhan', the real issue of homosexual relations has remained largely suppressed. The film fails to make the audience feel their pain, to explain what problems the lesbians of small towns have to face. It tries to present the issue in the cover of a lot of comedy, but the difficulty comes when the comedy is too weak and unable to laugh. Ayushmann and Jitendra pair well. If the story had been supported, this film could have gone to a different level.