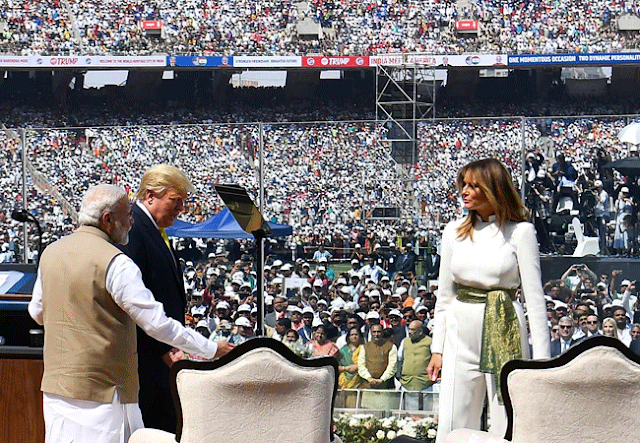 Trump on Pakistan: The world's largest cricket stadium, the US President Donald Trump promised to support India against terrorism, asking Pakistan to eliminate terrorism from its land. Trump named Pakistan and said that terrorism has to be eradicated from its land. The stadium echoed with applause from more than one lakh people as soon as Pakistan was mentioned. The US President said that like India, his country has been a victim of terrorism and we are also together to deal with radical Islamic terrorism.

Trump on Pakistan: "Both India and the United States are protecting their citizens from Islamic terrorism," said the US President, who arrived at the Namaste Trump event held at Motera Steadim after the Sabarmati Ashram. Trump, referring to the elimination of the terrorist organization Islamic State, said, "During my tenure, US military power was given a free hand against ISIS. Today, the Khalifa of IS has been killed. The demon Baghdadi is dead. '

Trump said about Pakistan, Every country has the right to border protection. America and India are fighting terrorism and terrorist ideology. The Trump administration is in talks with Pakistan. Action has to be taken against the terrorists in the Pakistani border. We have good relations with Pakistan. We feel that Pakistan is taking some steps. This is necessary for the whole of South Asia. India has to play a significant contribution to this.

Trump spoke on the arms deal

US President Donald Trump said, 'We make the best airplanes, rockets, ships, awesome weapons, Ariel Weikel, $ 3 billion is in the final stage. We will give this weapon to the Indian Army. I believe that America should be India's largest defense partner. Indo Pacific Region is to be protected.

Donald trump Motera stadium: Trump said, 'India has an important role in maintaining peace in the Asian region. We are going to do the biggest trade deal. We have started the conversation. I hope that by working together we will be able to make a great deal which will prove to be important for both the countries. But Modi is very tough.

A path opened for Shaheen Bagh, some relief for the people who have been troubled for more than two months