Yami Gautam insulted Gamosa culture, said actress - what she did was self-defense 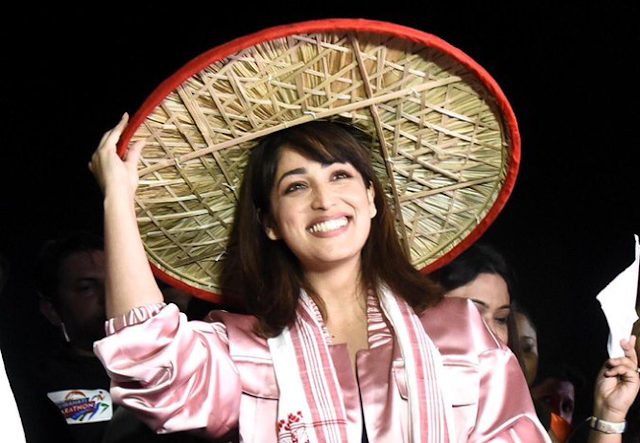 Yami Gautam insulted Gamosa culture: Bollywood actress was Yami Gautam go to Assam on the weekend. There, something happened at Guwahati Airport, after which they are being accused of insulting the Assam culture of Gamosa. At the airport, a fan tried to offer Yami a Gamosa (red and white pot). Unknown to this culture, Yami then pushed Fan. Now the actress has put her side on it.

The video of the airport has become very much discussed on social media. In this, when Fan tries to put Gamosa in Yami's throat, Yami shocks him. Yami's assistant asks him to step away from the fan. Now, Yami has written on Twitter, stating that she was unaware of this tradition and did not want to hurt anyone's feelings.

My reaction was simply self defense. As a woman,if I am uncomfortable with anyone getting too close to me, I or any other girl has every right to express it. I Dint’ intend to hurt anyone's sentiments but it's very important to voice out a behavior, inappropriate in any manner https://t.co/sUc4GPxfWv
— Yami Gautam (@yamigautam) March 1, 2020


What I did was just self-defense

Reacting to a tweet from an Assam media house, Yami Gautam wrote, 'My reaction was just self-defense. As a woman, I get very uncomfortable when someone comes very close to me. I or any girl has every right to speak. I do not want to hurt anyone's feelings, but if any behavior looks bad then it is very important to raise a voice against it or stop it.

Had a great time flagging off ‘Great Guwahati Marathon’ -2020 ! Was so good to see so many smiling faces & hence could feel the love ! Thank you for this beautiful ‘Japi’ & ‘Gamosa’ ❤️ pic.twitter.com/8uSdS0Gj4U
— Yami Gautam (@yamigautam) March 1, 2020

Yami Gautam also told that she had gone to Assam for the third time and she loves the culture of Assam. However, Yami definitely accepted Gamosa during the flag-off of 'Great Guwahati Marathon 2020'. He thanked the culture and people of Assam by putting a picture of it on Twitter.

Will Deepika Padukone be seen opposite Hrithik Roshan in 'Krrish 4'? The actress told the whole thing


Farhan Akhtar and I are desperate to make a gangster film: Zoya Akhtar