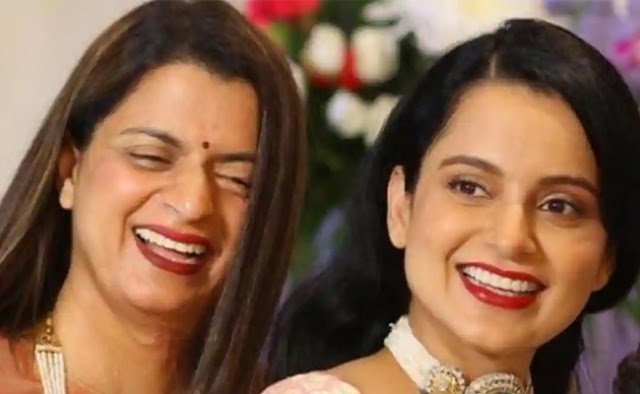 Bollywood actress Kangana Ranaut's sister Rangoli is in the news due to her statements. She reacts unhesitatingly to every issue, but now it seems that Twitter did not find her post right, so Rangoli has been warned to suspend her Twitter account. Rangoli himself has given this information on Twitter. Subsequently, she targeted one post after another on Twitter.

So is twitter it’s anti national and pro mullas ... when I joined twitter people said its dead now go to insta ... if they suspend my account they will go back to being the graveyard they were, this is what happens when you shut every honest voice ... https://t.co/AWIfxr444l
— Rangoli Chandel (@Rangoli_A) April 10, 2020

Twitter giving me warnings, so basically you can abuse our PM call our home minister terrorist, give artists rape threats mock Hindu Gods and Gaumutra whole day but if you say anything about mullas twitter gets upset ...
— Rangoli Chandel (@Rangoli_A) April 10, 2020

Through the first post on Twitter, Rangoli said that his account has been warned to suspend. After this, she wrote 'So is this Twitter anti-national. When I joined Twitter, people said that it is dead, go to Insta. If Twitter suspends my account then it is going back to the same cemetery where it was and that happens when you shut down an honest voice. '

Rangoli wrote on another post, 'What does Twitter want from us? Let us say Goodmorning, Is Shanar morning, let's drink tea. This is a picture of my tea. Who has time for all these idiots? We have a lot more to do than having a kitty party here. '

My sister is not some candy floss piece of ass she is a disruptor a unique brave voice a dynamic young woman who is pulsating with nationalism and spiritual values... we are not here to giggle and behave dumb for everyone’s convenience
— Rangoli Chandel (@Rangoli_A) April 10, 2020

Apart from this, she has written that if Twitter suspends her account, she will open her own YouTube channel, where she will post short videos of Kangana, where everyone will see that she did not say anything without proof. She said that if Twitter bothers her then she would not want to be here only to say Good Morning, Good Evening.

Rangoli Account Suspended: Rangoli posted another post saying that she is not going to mind due to the account being suspended. He wrote, Why are we being silenced? Being bullied. We are saying what is visible. What is visible is being denied. You cannot stop our voice with bullets and swords. What will happen with these jackal threats?